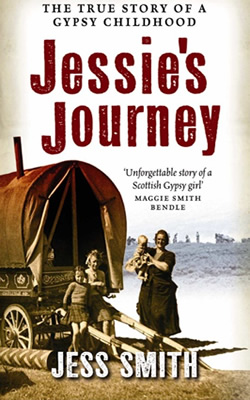 Available from Amazon, Booksource and most book shops

‘I am a Scottish traveller' begins Jess Smith's bestselling account of her childhood as one of Scotland's travelling people. ‘Ask me where I belong,' she says: it is ‘wherever the feather falls or the seed is blown.' She is the proud inheritor of a long gypsy tradition. Her mother was born in a tent, and her aunts and uncles were described on official forms as tinkers, hawkers and itinerants. She herself lived from the ages of 5 to 15 with her parents, sisters and a mongrel dog, in an old blue Bedford bus. They travelled the length and breadth of Scotland, and much of England too, stopping here and there until moved on by the local authorities, or driven by their own instinctive need to travel. By campfires under the unchanging stars they brewed up tea, telling stories and singing songs late into the night.

Jessie's story describes what it was like to be one of the last of the traditional travelling folk. It is not an idyllic tale: her way of life was outside the margins of respectable society, and that society could be harsh to travellers. It was not easy to get a good education from widely scattered schools; sudden ill-health could present a problem to those who were not registered with any doctor, and the threat of bigoted abuse or even violence was never far away. Despite this, humour and laughter run throughout Jessie's childhood: her story teems with unforgettable characters and incidents. In more senses than one, this is a magical book: it is full of tales and songs, glimpses of animal and human nature. Jessie's Journey is seen through the fresh eyes of a girl growing into adulthood, travelling along the roads and the wild places of a Scotland few of us really know.

Reviews for Jessie's Journey on Amazon.co.uk (all 5 stars)